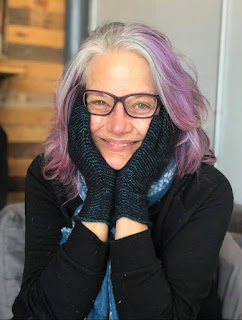 Although this is an older photo of my just-published glove pattern Handspan, it's still my favorite one of this design, because how can you resist this adorable model?  Here is my friend Gerda pictured in 2018 on my 48th birthday in her home city of Tempe AZ, where we met in grad school. I love you, my friend. <3

Posted by Curious Knitter at 9:52 PM No comments: 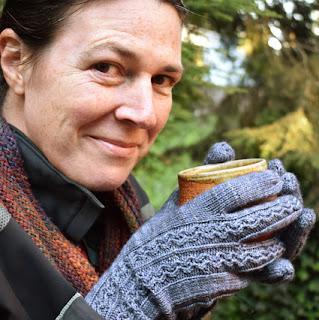 Welcome! It's been seven years since my last pattern, but I'm still here. :)

Actually I'd like to take this brief moment of internet traffic to point you to my friend and knitting ninja, Brenda Dayne. She has recently revived her excellent podcast "Cast On" after a hiatus. Check it out!  https://brendadayne.co.uk
https://patreon.com/brendadayne

I hope you enjoy my latest pattern. Here is the link on Ravelry, if you haven't just come from there: https://knitty.com/ISSUEdf20/PATTcontinuity/PATTcontinuity.php.

I have always loved gloves but hardly ever made them because I absolutely hate having to deal with so many unfinished ends. This glove pattern introduces a technique that shows you how to knit hand and all 5 fingers in a single unbroken strand. This technique will continue to be featured in more glove patterns to come (I already have another one in progress... stay tuned!)

Link to video of the single strand glove technique is here: https://www.youtube.com/watch?v=rnV5kQCEDf4&feature=youtu.be