I work in an open workspace shared by about 10 people. Sometimes it gets rowdy, and we frequently find the need to don noise-reduction headphones in order to get any work done.

Unfortunately, my heaphones folded right at the crown of my head and the hinge pinched my hair.  It was impossible to take them off without ripping my hair out.  Solution: knit a cover for them so they don't pinch the hair (really this was just a transparent excuse to engage in some yarn bombing).

It wasn't long after I brought my first prototype to work that my fellow researchers wanted covers for their headphones.  So first, I tried a series of variations on the simple knitted cylinder... 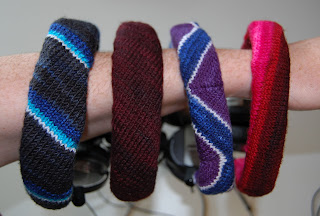 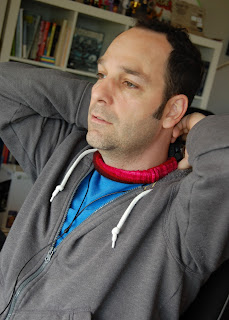 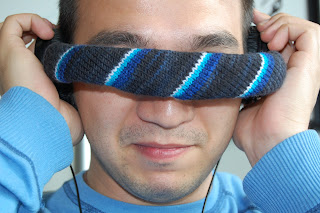 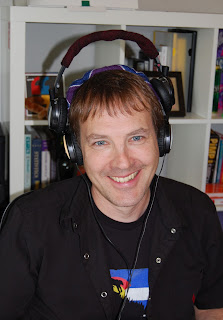 The other John refused to model for me, so Erik kindly modeled both his own and John's phones!


I wasn't aware of it at the time, but I ended up doing all the guys' headphones in sequence, and then turned to the women.  By the time I started doing the women's headphones I was a little sick of playing with diagonals, so first I tried a little color work... 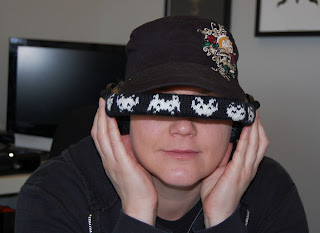 Erin got a Space Invaders band (made with Louet Gems).
This one made the boys jealous!

Then started playing around with hardware.  I used O-rings to connect the sides of this one around the band.  It ended up having a much more subtle effect than I'd pictured...﻿ 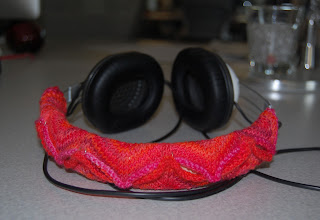 ... so the owner of said headphones was kind enough to supplement with her own grunge imitation.  You rock, Jenn! 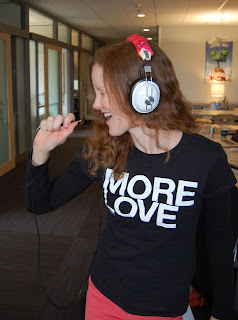 Francie's headphones with the big pink ear cradles always made me think of overstuffed earmuffs, so I decided to bring my vision to life... 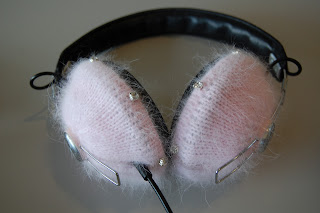 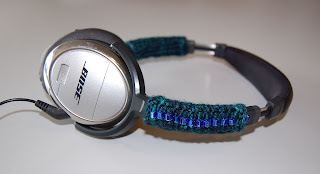 Although not evident from the picture, Rivelea's headphones had a distinctively gothic theme, and the inside of the ear cradles had a spiderweb graphic. I wanted the outside to reflect the inside. 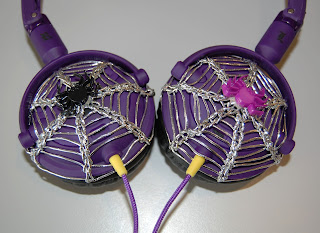 The tricky part of doing these headphones was identifying the right material.  It turned out I needed something stiffer than yarn.  I trolled around the craft store and picked a variety of materials for trial and error.  DMC memory wire was the clear winner.  Plastic spiders just for fun.

When I wasn't really paying attention, someone snapped this one of me... 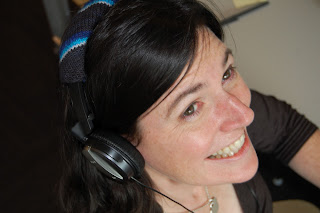 I think it captured the mood of the day rather well!

Sage advice for any situation

A wise person once said:

So if anybody kindly tells you that what you are doing is "wrong," don't take umbrage; they mean well.  Smile submissively, and listen, keeping your disagreement on an entirely mental level.  They may be right, and even if not, they may drop off pieces of information which will come in handy if you file them away carefully in your brain for future reference.


Sounds like it should come straight out of How to Win Friends and Influence People, doesn't it?  Well it just so happens that the person who uttered this wisdom was Elizabeth Zimmerman, in Knitting Without Tears.

Right on, EZ.  Sorry I never had the priviledge of meeting you.
.
Posted by Curious Knitter at 4:48 PM 4 comments: