Knitty is up.  Wraptor has shipped.  At last! 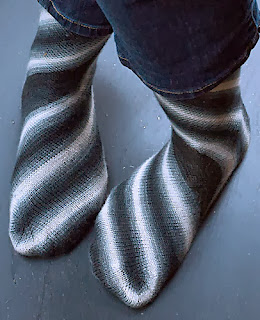 Very soon, I will post the story of the genesis and development of this pattern, which has been in the works for about a year.  In the meantime, I hope you will check out the Wraptor pattern on knitty.  There's also supplemental materials published on Ravelry for those of you who love charts, variations, and geeknotes.

Thanks for your interest, please stay tuned!

Gift for a gamer

One of the reasons I enjoy knitting as much as I do is that I really enjoy giving hand-made things to people I like.  It makes me happy.

I work on the Xbox team with a fantastic group of very smart, funny, geeky people. I like and admire them, and I really enjoy working with them, which means I feel instinctively compelled to knit things for them.  (Other knitters will understand this compulsion.)  But they are not necessarily good recipients for my standard repertoire of socks, hats, and gloves. So I have to take my cue from our context what sort of token of esteem would be right.

I started yarn-bombing my co-workers' headphones last year.  It was totally fun, and I think it went over pretty well with them. But our group leader proved to be a challenge as he does not wear headphones at work.  What do do, what to do...

Just the other day, because Christmas is approaching and I have been playing with knitting spheres, this image suddenly popped into my head:

So, here you go boss. You inspire me to attack all sorts of complex problems and to have fun while doing so.  The best kind of boss there is. 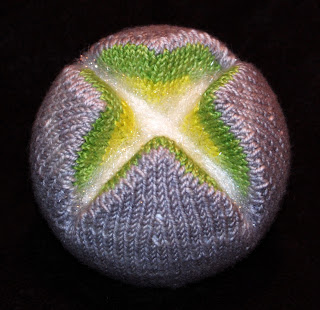