I've done a lot of thinking about how intersecting knitted parts fit together. Sock parts in particular. Like many knitters, I got holes at the corners whenever I picked up provisional sts, as you would with an afterthought heel. Not anymore! Getting a neat join with a provisional cast on is a key component of many patterns I'm currently working on, so I thought I'd offer some basics as a reference.

One makes afterthought heels (or glove fingers, or moebius baskets, etc.) by knitting some of your live sts with scrap yarn, then knitting over these scrap yarn sts with working yarn. Later, one un-picks the scrap yarn and continues with a new strand of working yarn, and works the heel. That's it in a nutshell.

Here are some visual aids...

1. Decide where your opening is going to be, and how many sts will need to be picked up later (e.g., about 16 sts for a glove finger). Divide the number in half. That's the number of stitches you're going to mark with scrap yarn.

3. Knit over the scrap yarn with working yarn (for illustration purposes, this is shown in a different shade, although in practice there is no need to use a different strand). The sts immediately above the scrap yarn are the provisional sts. Red arrows mark the direction in which you will work these sts (i.e., up!) 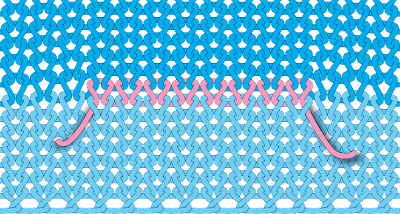 Once you've finished the section on top of the scrap yarn, you'll come back and remove the scrap yarn. As you un-pick, you would of course put the live sts onto your needles (light blue sts on one needle, dark blue on another needle). In my illustrations, I've purposely left the needles out. Just pretend they're there. 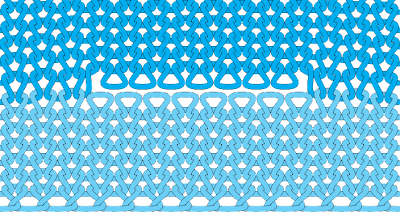 Now let's take a closer look at the provisional sts, just above where the scrap yarn was. When you knit these earlier, you had 8 loops going up, indicated by the red arrows. (Note that the 8 sts on the bottom of the opening, in light blue, also line up with these arrows.) Now you're going to pick up the loops from the underside of the provisional row and knit in the other direction. The black arrows indicate the direction you'll be knitting those loops.

And that brings up a little problem... see those holes on the outer edges where your scrap yarn was? 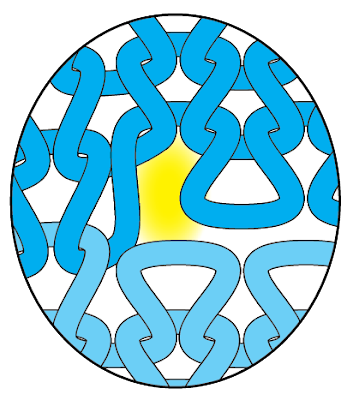 An easy way to tighten up this area is to pick up the sts on these edges, marked in green below, and put them on the needle with the dark blue sts.

Now you have one more stitch on the top than you do on the bottom, for a grand total of 17 sts around. Voila, a much better join!

Part 2: Using a provisional cast on

So far we've been talking about picking up provisional sts by knitting a partial row with scrap yarn, then knitting your provisional sts right over it. This is all well and good, but it limits you to having approximately the same number of sts on the top and bottom of your opening. What if you want to have more sts on one side?

Let's say we want to have 10 sts on the top, and the same 8 sts on the bottom. Rather than knitting those 8 sts with scrap yarn, just run a length of scrap yarn through them to act as a temporary stitch holder. 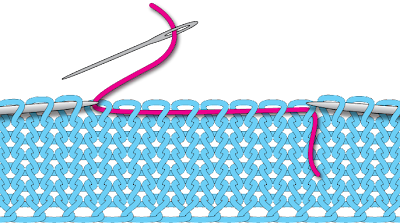 Lucy Neatby has an excellent video on how to do this kind of provisional cast on.

Next, knit over your cast on sts in the next row. 10 red arrows indicate the provisional sts and the direction you're working. 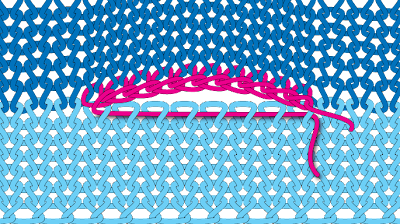 Now when you come back and un-pick your scrap cast on, you'll notice that, assuming you pick up the end sts, you will have 11 sts going in the other direction, marked with the black arrows. The 8 sts in the row below that were held with the scrap yarn are conveniently waiting for you to pick them up again, giving you a total of 19 sts around. 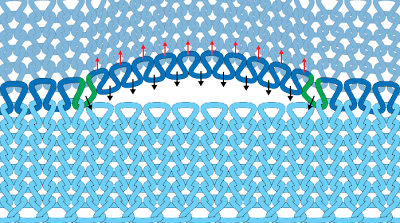 So in either case, if you have (x) provisional sts, you will have (x) going up and (x+1) going down, assuming you pick up the end sts.

I will note that I do still get little holes at the corners even when I pick up the edge sts. I typically get rid of the holes by distributing the extra slack along the adjacent sts. That way there's no need to use a strand of yarn to close the hole. Some knitters pick up additional sts and knit them together. Do whatever works for you!

A note to those of you who dismay at the idea of working a heel (or foot, or finger, etc.) with an uneven stitch count: Fret not. You can still Kitchener your sides together, so long as two conditions are met:

Posted by Curious Knitter at 3:26 PM