Like many sock knitters, I too experience the phenomenon of thoroughly enjoying knitting sock #1, and then having no interest in knitting an identical sock #2.

Various clever and well-meaning souls have suggested cures for this malady. There's the two-at-a-time method. Even the two-in-one method, for daredevil knitters. These and other cures may indeed help increase your chances of finishing your pair of identical socks. But they sidestep the real issue, which is: why do socks have to be identical?

I personally like unmatched pairs, and I know some of you out there agree. But, most people I knit socks for prefer traditional matched pairs. Therein lies the quandary: do I please the recipient, and be bored through sock #2, or do I try to convince the recipient to appreciate unmatched pairs, so I will enjoy my time knitting both socks? (This gets into the whole philosophy of gift-giving, but let's save that discussion for another time.)

Below is a recent pair of socks modeled by their recipient, my dear husband. They look a fine pair, don't they? Well yes, that's the point. But there are, in fact, some important differences. 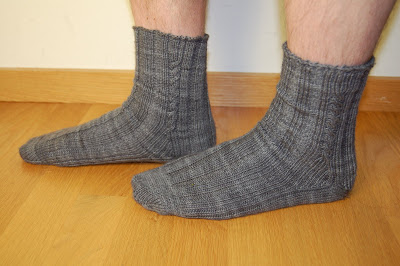 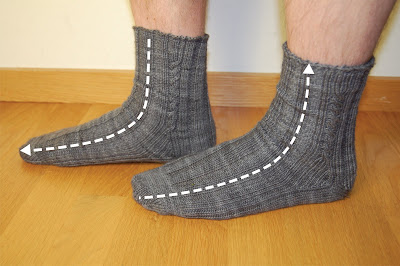 Comparison #1
Below on the left is the cuff-down sock, started with stretchy slipknot cast-on. On the right is the toe-up sock, finished with Jeny's Surprisingly Stretchy Bind Off.

When I first posted this blog entry, I was ruminating about the slight flare on JSSBO, irritated that it didn't snap back in as nicely as the slipknot cast on. But then I did the laundry this morning, and found...

Up close, and stretched out, here's the slipknot cast-on (left) and JSSBO (right). To offset the slight flare in JSSBO, I added some elastic thread along the top of the inside (which, now that the socks have been washed, I can see was probably unnecessary).

Comparison #2
The cuff-down sock (left) has a star heel. The toe-up sock (right) has a wedge heel. Both were knitted as afterthought heels. Either heel design would have worked starting from either the cuff or the toe. 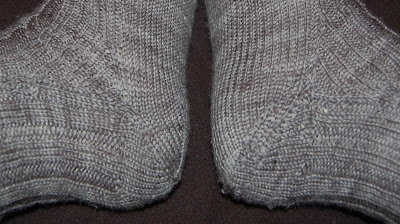 Comparison #3
I had a little fun with the toes too. The cuff-down toe (left), the first one I knit, flows smoothly and simply across stockinette. For the toe-up sock (right), I added a decorative channel of purl stitch between the increase stitches, which flowed continuously into the pattern on the foot. There are more differences still, but they get progressively more hairsplitting and difficult to show in photos. Suffice to say, the two socks look similar enough to the gift recipient to qualify as a matched pair. But at the same time, I enjoyed making the second sock just as much as I enjoyed making the first, because it was a completely fresh sock-knitting experience!

Posted by Curious Knitter at 8:43 PM